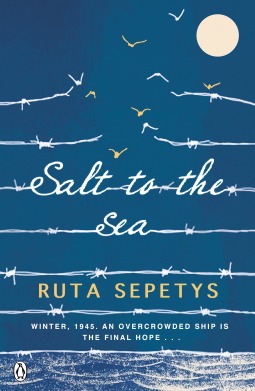 Salt to the Sea is one of those books that coerces Faith into delivering one of those rare and (somewhat) thoughtfully serious reviews. This is the sort of paradoxical book that is a timeless historical work of fiction.

Grief. If you do not feel grief post-reading this book, then perhaps you’re not completely sane. Possibly for the first time, I am feeling appropriately salty. Evidently, reading this book will make you upset… but in a good way? I believe that this means that the book has done its job. It’s appropriate especially when considering the title and the tale.

This book, encapsulated in one word, is cinematic.

The action kick-started right off the bat quite literally with a bang. Salt to the Sea follows the lives of four young adults who each harbor their own secrets and with these multiple point of views so deliberately short, I was flying through the pages faster than Superman. The chapters never failed to deliver a gripping story and a cliff-hanger. Despite the rapid flitting between character perspectives, the pacing of the book is fluid and nicely done. I enjoyed the fact that each chapter did not exceed 5-6 pages. This way, I could skim through the less intriguing parts and skydive right into the action. Perhaps it’s not the perfect way to read any book but hey, I like to have my mug of tea the way I like it.

It’s one of those books that makes you forget to breathe, you know, the ones that compels your brain to disregard the fact that you’re underwater and erases the word “oxygen” from your personal almanac of  vocabulary (which, if you’re like me, is already a dwindling number especially when you’re not within the reach of a thesaurus). So, you’re unconsciously holding your breath. Of course, you’re holding your breath just until you’re dragged upon shore torn with despair with salt stinging your eyes and sand coating your skin. In other words, you’re a mess. In spite of this mess I’ve concocted for myself, the scenes melted together so seamlessly that it could have disappeared on my tongue like chocolate, albeit 90% cocoa chocolate (it’s more bitter than sweet), but chocolate, nevertheless. I’m hesitant to say that it’s a cross between the Titanic and other Second World War movies you’ve watched because it’s a story on its own, though the ambiance is the same.

The scenes were tragically vivid, painting an immeasurable landscape of defeat and anguish. Forget a “war-torn” setting. It’s a completely “war-annihilated” place. Tragic, especially when you remember the story’s imminence to reality. As you read, you will feel your seed of grief blossoming (though, you knew that it would evoke these emotions going into a book about World War 2 – yet you soldiered on to read it anyway… pun not intended). Congratulations! You have just shriveled up any remaining pieces of the pure innocence that you’ve got from the last cutesy romance book you’ve read.

If you’re wondering why my rating is 0.5 off, it’s because personally, the only minor downfall to this book was that I wasn’t a particular fan of one of the characters – but I wouldn’t call it anything I can’t handle!

For some, this genre may seem like uncharted territory, but once you’ve entered within its borders, you may just start to realize that it’s only a familiar face under the guise of a “World War 2 book”. That being said, Salt to the Sea is not a history-heavy book, which I really appreciated as a non-history buff, so I would recommend it to readers, such as myself, and to avid historical fiction readers alike. I’m sure that many of you who enjoy sprinklings of history in their novels here and there will find this book as enticing of an adventure as it is an enlightening read about the tragedy and demise of Wilhelm Gustloff, the sunken image of liberty for many.

My final sentiments: a good kind of salty. Also, in the aftermath of this book, my food didn’t need any seasoning – I just used the salt from my tears.

Each one born of a different homeland; each one hunted, and haunted, by tragedy, lies…and war.

As thousands of desperate refugees flock to the coast in the midst of a Soviet advance, four paths converge, vying for passage aboard the Wilhelm Gustloff, a ship that promises safety and freedom.

Yet not all promises can be kept.

Inspired by the single greatest tragedy in maritime history, bestselling and award-winning author Ruta Sepetys (Between Shades of Gray) lifts the veil on a shockingly little-known casualty of World War II. An illuminating and life-affirming tale of heart and hope.”

Even the book TRAILER is cinematic. 👌

This review is definitely not one of my silly and “crazy” ones (as they have been probably deemed by a select group of people aka everyone ever), but I’m happy to say that I’m less irrelevant than I normally am in this post. I honestly doubt you could write a review about this book while joking about lichen, salamanders, and green eggs with ham. Actually if anyone could, it would probably be me. Though I have opted to write a “serious” review, I hoped you enjoyed reading and that you will add this to your growing, and perhaps overly long, TBR!

Anyways, if you’d like, tell me your thoughts about the book or this review or just anything from jokes to irrelevant banter, really. I’d love to hear from you! 🙂 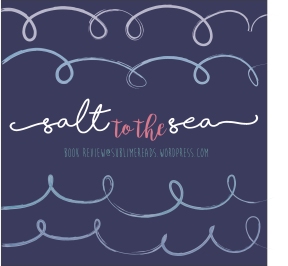