Hi it’s me, Faith, and I’m finally here with a book review! I know it’s been quite awhile since the last time so I’m super glad that I can finally not be a loser. 😉 Hope you like it! (Also, thanks goes to Sarah for the fantastic banner). 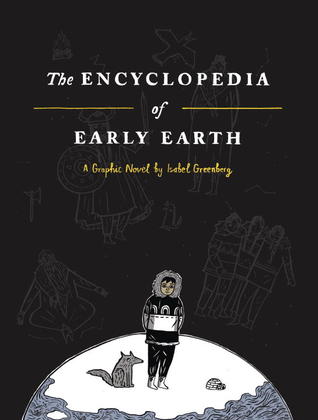 The Encyclopedia of Early Earth

The story starts off with our storyteller and with a true love. The tale, is about how the storyteller had (literally) traveled to the ends of Early Earth in search of his missing piece and as he paddles through the oceans in his canoe, adventure ensues.

How did I feel about the book?

This book in one word: MYSTICAL. This, is unusual for me. Normally, I’d skip right past the graphic novel section at the library and rush to the YA section in hopes of a new and interesting book that I haven’t read yet. But this book made me rethink my choices. Boy, was I glad that I picked this one up.

Don’t let the title fool you. It’s definitely NOT an encyclopedia. At first I thought that it was an illustrated historical type graphic novel which I then thought “Huh, this could be interesting” so borrowed it. But nope. I started reading this in the library but I couldn’t put it down and it felt strange to me because I’ve never really been inclined to read graphic novels. I wasn’t familiar with looking at so many more pictures than usual (which is magnificently glorious) and having it go by so quickly.

I LOVE THE ARTWORK. I love the style, the detail, the patterns, the magic… it just describes a part of me. The story was great too. I opened this book up and expected a single story but instead got this wonderful twist of stories re-imagined, new and old. As the tales were weaved together, I felt as if I was hearing the story first hand, under a blanket of stars and around the crackling of a fire. It’s like opening a package expecting one item but end up with bonuses. It includes re-tellings of familiar myths, tales, and stories so it’s bound to have something that you’re somewhat acquainted with but at the same time, the stories are a complete surprise. That’s the beauty of this book… and did I mention, the artwork?

At first glimpse, the graphics seemed somewhat doodle-ish… but as you read on, you see the artistic techniques that were incorporated as well. Patterns were blended almost seamlessly into thick black lines and I found the font (which was created from Isabel Greenberg’s own handwriting) very cute and pleasant to read. Although most of the art was done in black and white, there were just enough splashes of colour to set and enhance the ambiance in each scene. At times, I would feel as if I could feel the snow pelting my face and the zingy smell of the pines. The artwork as a whole just contributed to and complemented the story very nicely, like every graphic novel is supposed to. In other words, this type of art style suits me very well. 🙂

The characters were an absolute mystery to me. I was utterly intrigued: with people and places being familiar and unfamiliar all at the same time, it really seemed as if anything could happen. There was also the occasional witty line, which I really appreciated because it took away the more daunting feel of a traditional storytelling.

I also liked the fact that there is a bit of everything. There was a sprinkle of romance, a frosting of mystery, a pinch of magic, and a grand adventure. It was a cute and mystifying tale. The scenes flowed into each other really well and it played out in my head like a film. I can’t complain, but if only a bit more humour was thrown into the mix, I would believe that I would be beyond satisfied. But it was great nevertheless.

My lesson from this book: it’s never too late to try reading something new and you’re definitely never too old to enjoy reading a fantasy with lots of pictures! Though the book is supposedly about Early Earth, I have come a conclusion that I have now discovered a new word to describe this book: timeless.

As a graphic novel newbie, you can see that I’ve clearly enjoyed this book; so if you haven’t picked one up either, I’d say that this one is a good place to start! 🙂

8 thoughts on “Book Review: The Encyclopedia of Early Earth”